A Letter from President Per Brevig

Dear Members and Friends of the Musicians Club of New York,

Greetings to all and welcome to our website. We are delighted to have presented two concerts this fall and we have exciting plans for the remainder of the season. Please be sure to join us at one, if not all, of our events!  A list of planned events for the remainder of our season can be found on the Current Concerts page.

This year the Walter Damrosch Award will be bestowed on the world renowned soprano Martina Arroyo at our annual Gala on April 30, 2023. Ms. Arroyo is the third recipient of this award and we are thrilled to share the event with you.

The Serge and Olga Koussevitzky Award will be offered in the category of voice this year, and, in keeping with tradition, the Finals will be held on the afternoon of the Gala and the winners will be announced in the evening, during the Gala. Please take advantage of this unique opportunity to be part of the audience as singers share their talents during the Finals. All are welcome to attend the Finals and the Gala!

Please consider becoming a member, upgrading your membership, or making any additional contribution that you can. Your generosity directly supports our concert lineup and helps us produce high caliber events and support the artists of tomorrow.

Information regarding membership can be found on this website in the Membership/Donate area.  Please be as generous as you can in your support of MCNY.

I thank you in advance very much and send my best wishes to all this holiday season.

Join us for a a rare opportunity to hear luminary clarinetists David Shifrin and Todd Palmer return to the MCNY stage to perform works by Mozart, Barber, Poulenc, Spektor, Nielsen, Schumann, and more.  They will be joined by our very own Bixby Kennedy and pianist Shawn Chang.  All the clarinetists recieved prizes through MCNY's annual young artist competition. This event is presented for free and open to the public thanks to your generosity. To reserve a seat please send an email to bkennedy@musiciansclubofny.org with your reservation request. We hope to see you there!

One of only three wind players to have been awarded the Avery Fisher Prize since the award's inception in 1974, David Shifrin is in constant demand as an orchestral soloist, recitalist and chamber music collaborator. He has appeared with many of the major orchestras in the United States and abroad, and has served as principal clarinetist with the Cleveland Orchestra, American Symphony Orchestra (under Stokowski), Los Angeles Chamber Orchestra, and others. A sought after a chamber musician, he collaborates frequently with distinguished ensembles and artists. Shifrin has been an artist member of the Chamber Music Society of Lincoln Center since 1989 and served as its artistic director from 1992 to 2004. Shifrin also continues to broaden the repertoire for clarinet and orchestra by commissioning and championing the works of 20th and 21st century American composers.

Shifrin served on the faculties of the Juilliard School, University of Southern California, University of Michigan, Cleveland Institute of Music, University of Hawaii and is the Professor of Clarinet at Yale University, where he is also the Artistic Director of Yale’s Oneppo Chamber Music Series and the Yale in New York concert series.

David Shifrin's recordings have consistently garnered praise and awards. He has received three Grammy nominations - for a collaborative recording with the Chamber Music Society of Lincoln Center of the collected chamber music of Claude Debussy (Delos), the Copland Clarinet Concerto (Angel/EMI) and Ravel's Introduction and Allegro with Nancy Allen, Ransom Wilson, and the Tokyo String Quartet (Angel/EMI). His recording of the Mozart Clarinet Concerto with the Mostly Mozart Festival Orchestra, performed in its original version on a specially built basset clarinet, was named Record of the Year by Stereo Review. 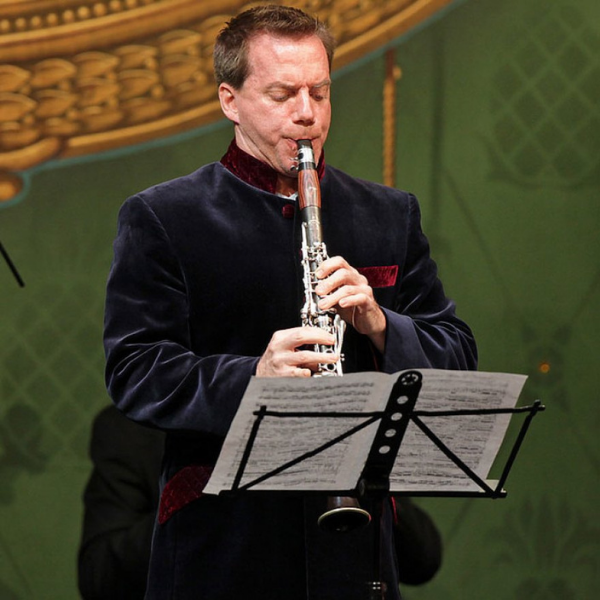 Todd Palmer is a three-time Grammy nominee and has appeared as soloist, recitalist, chamber music collaborator, educator, arranger, and presenter in a variety of musical endeavors around the world. A winner of the Young Concert Artists International Auditions and grand prize winner in the Ima Hogg Young Artist Auditions, he has appeared as soloist with many symphony and chamber orchestras including those of Houston, Atlanta, St. Paul, Cincinnati, Montréal, BBC Scotland; and has given recital performances at Weill Hall and the 92nd Street Y in New York, The Kennedy Center in Washington DC, and Suntory Hall in Tokyo. He has collaborated with the St. Lawrence, Brentano, Borromeo, Jupiter, Chiara, Lark, and Pacifica quartets; and sopranos Kathleen Battle, Renée Fleming, and Dawn Upshaw. He has championed and recorded Osvaldo Golijov’s klezmer clarinet quintet, The Dreams and Prayers of Isaac the Blind;commissioned Ricky Gordon’s theatre work, Orpheus and Euridice, presented by Lincoln Center; and also premiered David Bruce’s Gumboots at Carnegie Hall. His festival appearances include Spoleto USA, Bravo! Vail Valley, Music@Menlo, La Jolla, Portland, Vancouver, Banff, Marlboro, and Tanglewood, where he received the Leonard Bernstein fellowship as a student. Palmer was soloist in Robert La Page's staging of The Nightingale and Other Fables at BAM, and gave the world premiere of Crosswalk, a work for clarinet and dance created for him by choreographer Mark Morris. Broadway credits include South Pacific, Les Miz, The King & I, Sunset Boulevard starring Glenn Close, and most recently Lincoln Center Theater's My Fair Lady.

Admired for his “marvelous ringing tone” (Joseph Dalton, Albany Times Union) Bixby Kennedy is one of the most versatile clarinetists of his generation.  He has performed concerti with orchestras including the Minnesota Orchestra, Houston Symphony, and New Haven Symphony Orchestra. As a chamber musician, Bixby has performed throughout the US and Europe in venues including  Carnegie Hall, Alice Tully Hall, The Kennedy Center, Marlboro Music Festival, and is the clarinetist for the “explosive” New York City based chamber ensemble Frisson. He has appeared as a guest artist with Chamber Music Society of Lincoln Center, Saint Paul Chamber Orchestra, Orpheus Chamber Orchestra and The Knights. As an orchestral musician, Bixby has performed with the MET Opera and NY Philharmonic. On period instruments, Bixby has performed classical repertoire on original and replica instruments throughout the US with Grand Harmonie Orchestra.  He is a former member of Ensemble Connect and works as a teaching artist throughout the US. As an arranger, his works have been performed by Orpheus Chamber Orchestra, Ensemble Schumann, Frisson, Ensemble Connect, and Symphony in C. He loves traveling, trying new foods, laughing, hiking, and playing tennis. Bixby performs exclusively on Backun instruments.

Lauded for his recent performance of Beethoven’s Piano Concerto No. 5 that “...emphasized the melodic, lyrical aspect of the work... It was a beautiful performance...” (The Riverdale Press), Taiwanese-American pianist and composer Shawn Chang has created an international career of distinction. His compositions are marked by their emotive harmonic shifts and rhythmic drive which evoke both the urban and country landscapes of his home state of New York.

As a solo pianist, Chang has given recitals in high profile venues throughout the US, Canada, and his birthplace of Taipei, Taiwan, including Carnegie Hall’s Weill Recital Hall, the Kaufmann Hall of 92nd Y, Merkin Concert Hall, the United Palace Theatre, Aspen’s Benedict Music Tent, the Nicholas Roerich Museum, Bohemian National Hall, June Havoc Theatre, and the Taipei National Music Hall. He was recently appeared at the San Francisco Opera’s Merola Program of 2022, where he, along with his duo partner Erin Wagner, won the Schwabacher Debut Recital Audition shortly following their Carnegie Hall recital, which premiered one of Chang’s own compositions.

As a composer, Chang’s compositions have been premiered by the Chromatic Voice Exchange, Schola Sine Nomine, and mezzo soprano Erin Wagner, to name a few. His most recent song cycle, Portraits of Unrelated Colors - six songs that use the seven colors of the spectrum and American landscapes as symbols for various emotional journeys - was featured on NYFOS (New York Festival of Song) curated by director Steve Blier and Baritone Gregory Feldmann. One of the songs from the cycle won the commission prize of the 2022 Sparks & Wiry Cries SongSlam, which led to a commission for their 2023 festival.